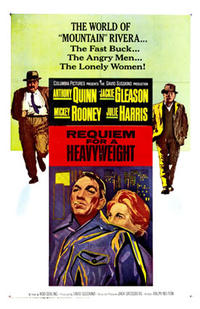 Looking for movie tickets? Enter your location to see which movie theaters are playing Requiem For a Heavyweight / Killer McCoy near you.

<p>REQUIEM FOR A HEAVYWEIGHT, 1962, Sony Repertory, 95 min. Dir. Ralph Nelson. Anthony Quinn is a fighter whose best days are behind him, and Mickey Rooney plays his sympathetic trainer, in this classic piece of humanist filmmaking. Rod Serling’s script powerfully depicts Quinn’s downfall as he descends into corruption at the behest of unscrupulous manager Jackie Gleason.</p> <p>KILLER MCCOY, 1947, Warner Bros., 104 min. Dir. Roy Rowland. Mickey Rooney grows up as tough street kid Tommy McCoy, who exits the vaudeville stage for a promising career in the boxing ring. After many hurdles, armed with his secret “right” and towing his deadbeat actor dad (James Dunn) along as his manager, McCoy starts fighting, first accepting a bankroll from a gambler Brian Donlevy, only to threaten it all by falling for the kingpin’s daughter (Ann Blyth).</p>