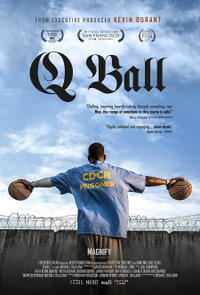 Looking for movie tickets? Enter your location to see which movie theaters are playing Q Ball near you.

Across the Bay from the NBA champion Golden State Warriors, there is another Warriors team – one that plays only home games. Q BALL, executive produced by basketball star Kevin Durant, provides an intimate portrayal of the San Quentin State Prison basketball team. Director Michael Tolajian’s documentary, which got started during early visits by Durant and his fellow Warriors team members to San Quentin State Prison, explores inmates’ personal struggles as they search for redemption and transcendence both on and off the court. The answers, characters, and stories are complex, but in San Quentin – a place where freedom is taken away – basketball gives a little bit back. Q BALL is the fifth documentary in FOX Sports Films’ MAGNIFY series, which has garnered two Sports Emmy Award nominations for “Outstanding Long Sports Documentary” since its inception in November 2017.