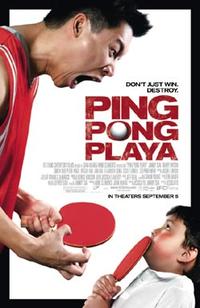 Looking for movie tickets? Enter your location to see which movie theaters are playing Ping Pong Playa near you.

Christopher "C-dub" Wang blames genetics for his failure to make the NBA, lives at home, works a dead-end job, and squirms in the shadow of his older brother, Michael, a doctor and ping pong champion. With a family-run store devoted to all things ping pong and a mom who teaches it at the local Chinese Community Center, the Wangs’ entire world revolves around the sport. When his mom and Michael are hurt in a car accident, his father is left to watch over the store, forcing C-dub to take over his mom’s ping pong class of misfits. But when the Wang family livelihood is threatened by a rival ping pong player’s attempts to lure the kids away, C-dub begins to take things more seriously. With the National Golden Cock Tournament coming up and an injured Michael unable to defend his title, C-dub must become the player he pretends to be and defend his family’s ping pong dynasty.