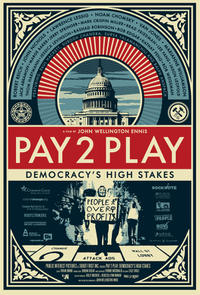 Looking for movie tickets? Enter your location to see which movie theaters are playing Pay 2 Play: Democracy's High Stakes near you.

PAY 2 PLAY follows filmmaker John Ennis’ quest to find a way out from under the Pay 2 Play System, defined by Ennis as the cycle where Politicians reward their donors with even larger sums from the public treasury -- through contracts, jobs, tax cuts, and deregulation. P2P picks up where Ennis left off in his last film FREE FOR ALL, after his investigation into election fraud in Ohio led him to establish Video the Vote to watch the polls on Election Day. Ennis has recognized that by Election Day, so much has already happened to decide which candidates are or are not on the ballot, the result is surprisingly undemocratic. Driven by his need to make the world better for his newborn daughter to inherit, Ennis determines to study our road to elected office to find a way we can get out from under the Pay 2 Play System.