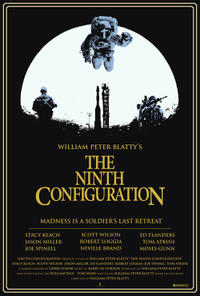 Looking for movie tickets? Enter your location to see which movie theaters are playing Ninth Configuration/Fat City near you.

THE NINTH CONFIGURATION (aka TWINKLE, TWINKLE, KILLER KANE), 1980, Warner Bros., 118 min. Dir. William Peter Blatty. This hilarious, thrilling and altogether amazing fusion of horror film, ultra-black comedy and religious allegory was directed and written by THE EXORCIST author William Peter Blatty. Stacy Keach stars as the psychiatrist assigned to straighten out the inmates in a decaying castle taken over by the U.S. military. FAT CITY, 1972, Sony Repertory, 100 min. John Huston directed this gritty, slice-of-life adaptation of Leonard Gardner’s novel about two boxers, one a naive neophyte (Jeff Bridges) and one on his way down (a brilliant Stacy Keach) with a perpetually drunken mate (Susan Tyrell). Discussion between films with actor Stacy Keach, who will sign his new book, All in All: An Actor's Life On and Off the Stage, in the lobby at 6:30 PM.