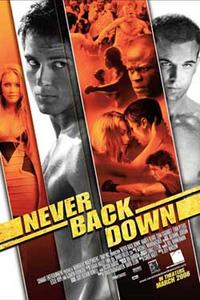 Looking for movie tickets? Enter your location to see which movie theaters are playing Never Back Down near you.

Jake Tyler (Sean Faris) is the new kid in town with a troubled past. He was a star athlete on the football team at home, but in this new city he is an outsider with a reputation for being a quick tempered brawler. After he is unwittingly pulled into a fight, defeated and humiliated, a classmate introduces him to the sport of Mixed Martial Arts (MMA). It is immediately apparent to Jake that MMA is not street fighting but rather an art form he wants to master, and he soon finds his mentor in Jean Roqua (Djimon Hounsou), who takes Jake under his wing.