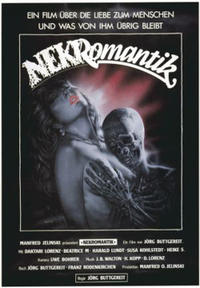 Looking for movie tickets? Enter your location to see which movie theaters are playing Nekromantik/Schramm near you.

NEKROMANTIK, 1987, Werkstattkino, 75 min. Dir. Jörg Buttgereit. Rob Schmadtke has the perfect job for a necrophiliac: cleaning up places where people have been killed. His girlfriend Betty has a similar fetish, and when Rob brings his work home with him one day, he has a rotting rival for her affections. In German with English subtitles. Only Existing 35mm Print! SCHRAMM: INTO THE MIND OF A SERIAL KILLER, 1994, Werkstattkino, 65 min. Dir. Jörg Buttgereit. A loner who drives a taxi, “Lipstick Killer” Lothar Schramm is attracted to a prostitute who lives next door but is unable to initiate a relationship with her - and works out his kinks on random victims. In German with English subtitles. Discussion between films with director Jörg Buttgereit. Due to extreme sexual and graphic violence, no one under 18 will be admitted.