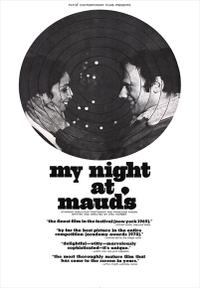 Looking for movie tickets? Enter your location to see which movie theaters are playing My Night at Mauds / Clair's Knee near you.

MY NIGHT AT MAUD’S (MA NUIT CHEZ MAUD), 1969, Wellspring, 105 min. The third of writer/director Eric Rohmer’s six “moralist tales.” Winner of Cannes’ Golden Palm and nominated for an Oscar, the film remains one of the most successful attempts to unravel the complex human psyche as narrator Jean-Louis Trintignant vows to marry, only to fall-in-fascination with another woman, divorcee Maud, (Françoise Fabian).<br /> CLAIRE’S KNEE (LE GENOU DE CLAIRE), 1970, Wellspring, 105 min. Dir. Eric Rohmer. While vacationing, Jean Claude Brialy becomes obsessed with a desire to have tactile contact with a certain body part of 13-year-old (Laurence de Monaghan).