Fandango can exclusively reveal that the film will be available on FandangoNOW and other digital platforms February 12 and on Blu-ray February 26.

Fully packaged with a fabulous array of exclusive extras, Ralph Breaks the Internet has been completely customized for an all new experience at home. Bonus features include "How We Broke the Internet," which offers a peak behind the scenes, and "Surfing for Easter Eggs," showing how to find the inside jokes and hidden references in the movie. Additional features cover the music, deleted scenes, music videos and "BuzzzTube Cats," a compilation of amusing cat videos like you've never seen before. Plus: "Baby Drivers - Slaughter Driving School" takes you behind the wheel with some of the film's artists as they attend race car driving school.

Enjoy an exclusive sample of the bonus features by watching the video below, which covers just a few of the Easter eggs that can be found. Ralph Breaks the Internet will be available on FandangoNOW and other digital platforms February 12 and on Blu-ray February 26. See full details on all formats and special features below.

Ralph Breaks the Internet will be available in the following formats: 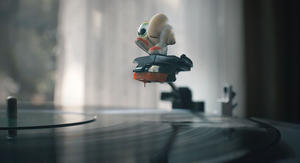 'Marcel The Shell With Shoes On' Comes To Theaters Everywhere This Weekend: Take An Exclusive Look Behind The Scenes