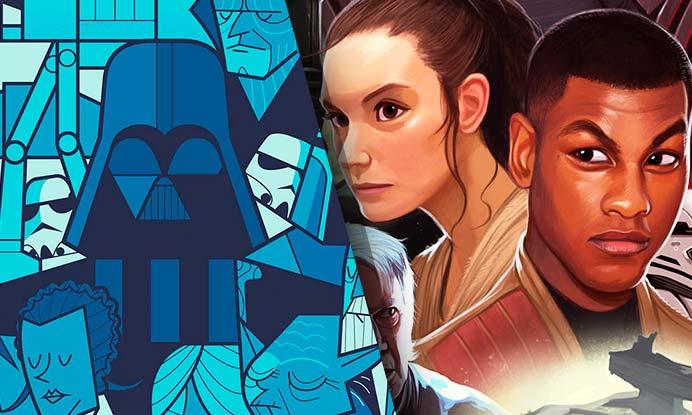 We asked our favorite artists to create a poster for one of the seven Star Wars films. Check them out!

Artist Jerome Lu gives his unique take on Episode I: The Phantom Menace in this original artwork created exclusively for Fandango. Lu explained his inspiration behind the piece:

"The Phantom Menace will always hold a special place in my heart. It’s the first Star Wars film I ever saw in the theater. When the trailer was first released, I must have watched it like a zillion times, volume full blast, on my computer in my dorm room. I remember preordering tickets for opening day for the last show the local theater was playing. When opening day came, I ran down to the theater as soon as my class ended and waited in line for eight hours along with hundreds of other eager fans. As soon as the opening crawl appeared, I was like a kid in a candy store. For those two hours I was mesmerized. I still love so much about the film and the experience I had with it. Plus, that double-bladed lightsaber is so awesome!" 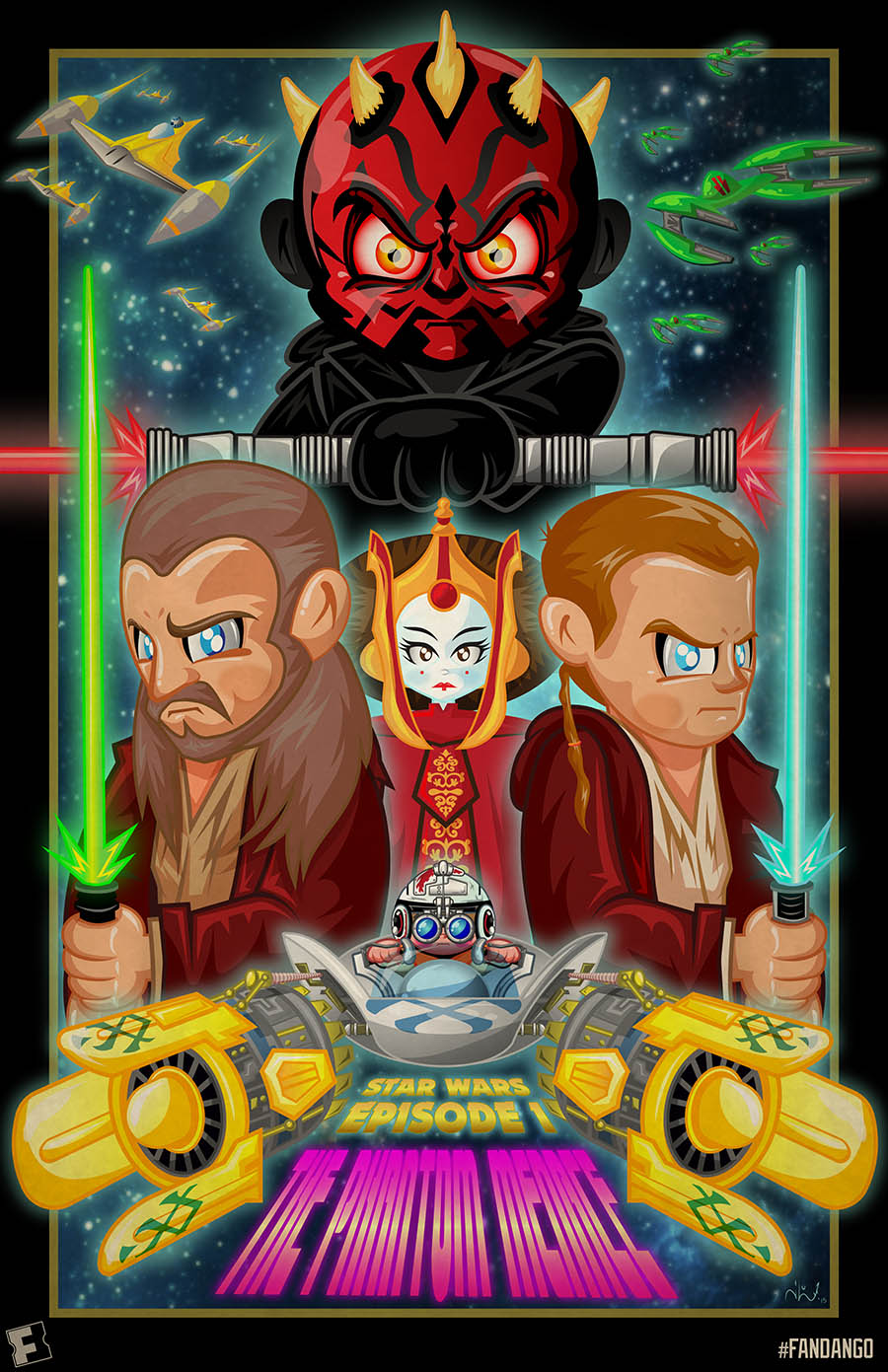 Artist Jeff Welborn created this beautiful image of Queen Amidala from Episode II: Attack of the Clones, exclusively for Fandango. 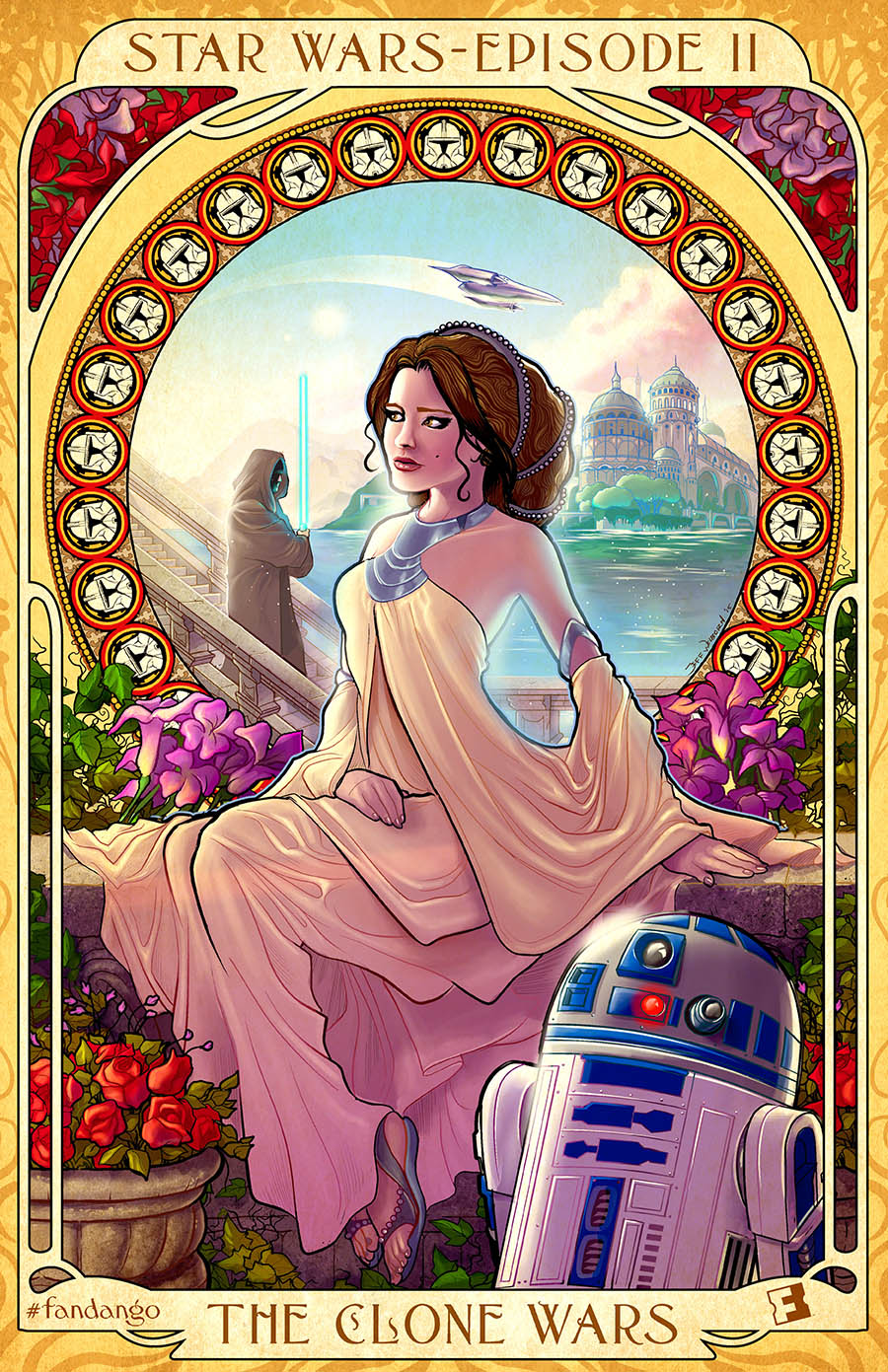 Artist Sket One pays tribute to Episode III: Revenge of the Sith with this original artwork. He also gives some insight about the poster he created exclusively for Fandango.

"Revenge of the Sith was such a big part of the Star Wars story, the real turning point for not only Anakin, but the universe. The battle at the end was more then just a good versus evil, it was for Anakin and Padme's souls." 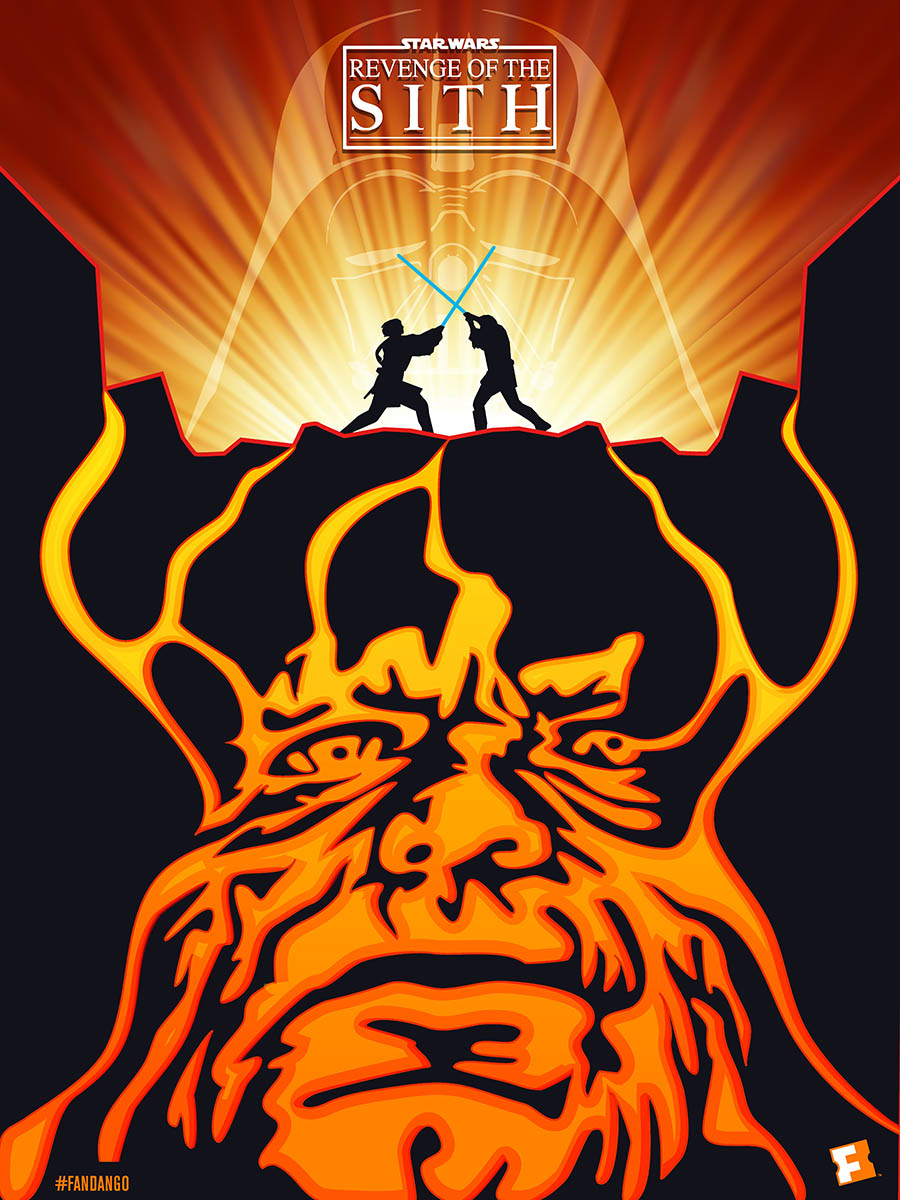 Artist Chito Arellano created this amazing artwork for Episode IV: A New Hope, exclusively for Fandango. Here is what Arellano had to say about the amazing piece:

"Star Wars is the first movie I can recall ever seeing. I was only a few years old when I first moved to the United States in 1976. The following year George Lucas' Star Wars: A New Hope released in theaters. My parents took my older brother and I to watch the film. Though I was too young follow the story exactly, I remember a boy got a lightsaber and went on an adventure in space. I went home that night with lightsaber in hand (that my parents bought me) trying reenact the lightsaber duel with my brother in our apartment living room. Today I still feel the same magic when I rewatch A New Hope for the thousandth time. I'm still that kid with a lightsaber ready to go on an adventure in a galaxy far, far away." 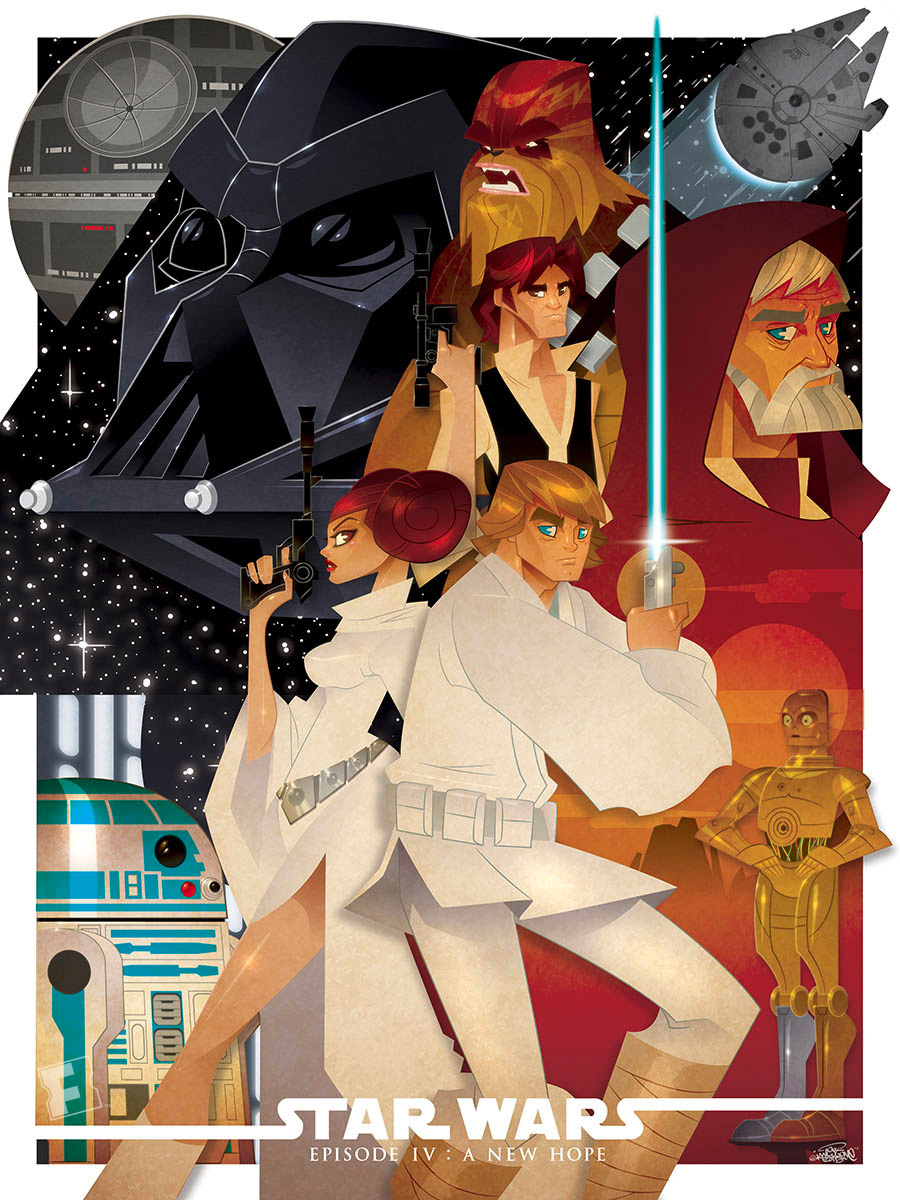 Artist Ale Giorgini puts his unique twist on Episode V: The Empire Strikes Back, exclusively for Fandango. Plus, discover the inspiration behind his creation.

"Watching one of the first three Star Wars episodes it’s like jumping back into my childhood, that’s the magic of the movies: They bring you somewhere else in space and time. Empire Strikes Back is my favorite film. I remember when it was Christmas and I was a child I used to play with the paper box of Pandoro, a typical Italian Christmas cake. The box looks like Darth’s helmet. I was just waiting for that cake to take the box, cut two holes for the eyes, wear it to cover my head and walking through my parents house saying, “Luke… kffff… I’m your father.” That was one of the very first sentences I learned in English." 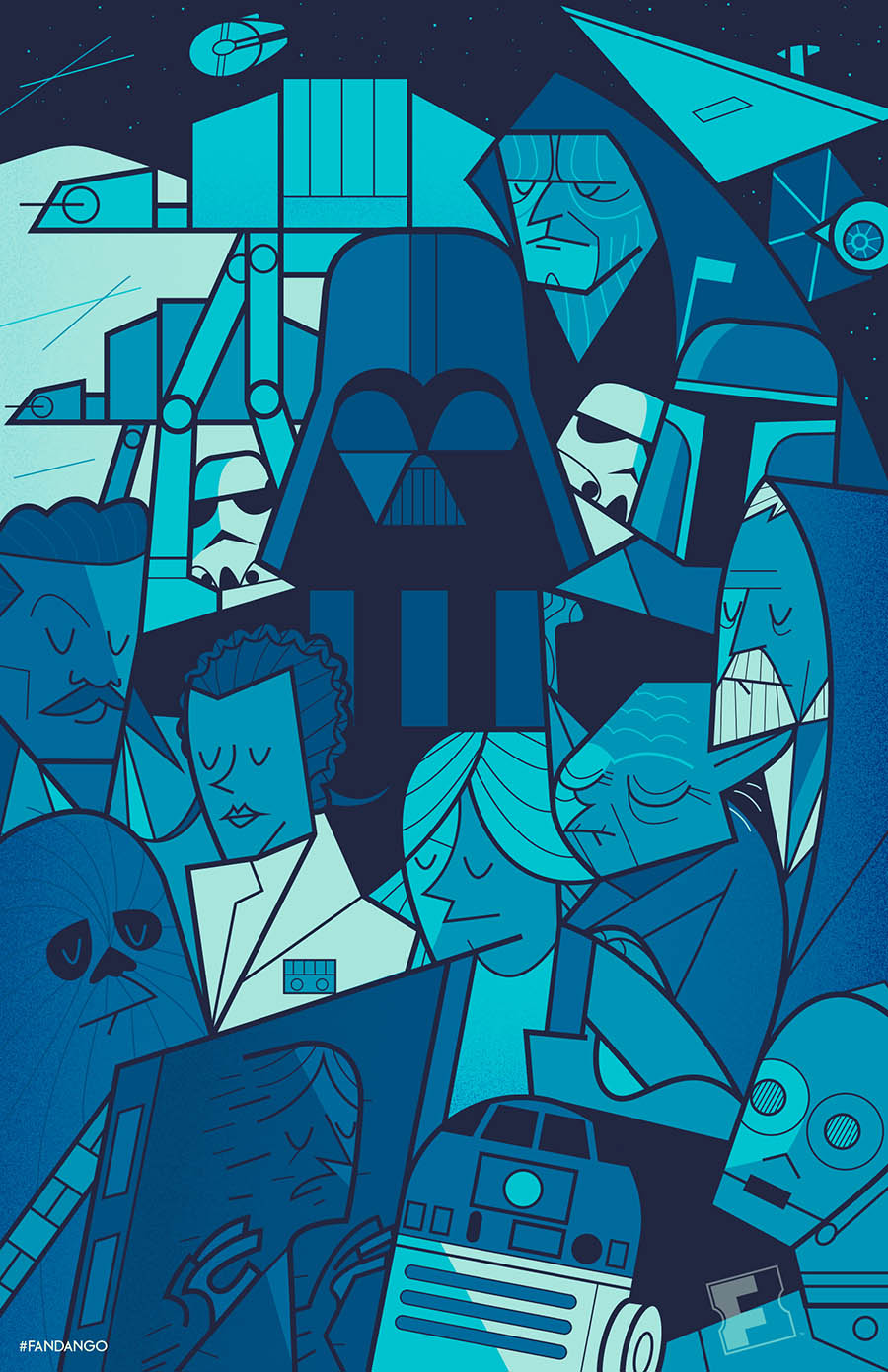 Artist Brian Miller created this original artwork exclusively for Fandango. Check out the stunning image from Episode VI: Return of the Jedi, along with an insightful quote from Miller, below.

"One of the aspects of Return of the Jedi I am always drawn to is the duality of the film. We have the story of the Rebels versus the Empire as well as the emotional story of Darth Vader’s internal struggle between the light and dark side of his soul. I wanted to depict that duality in my Return of the Jedi illustration for Fandango so I chose to divide the poster into two scenes. One depicts Darth Vader battling for the approval of the Emperor or the love of his son. The second shows the external conflict of the Empire being defeated by the Rebels and the Ewoks who inhabit the forest moon of Endor. Yub-Nub!" 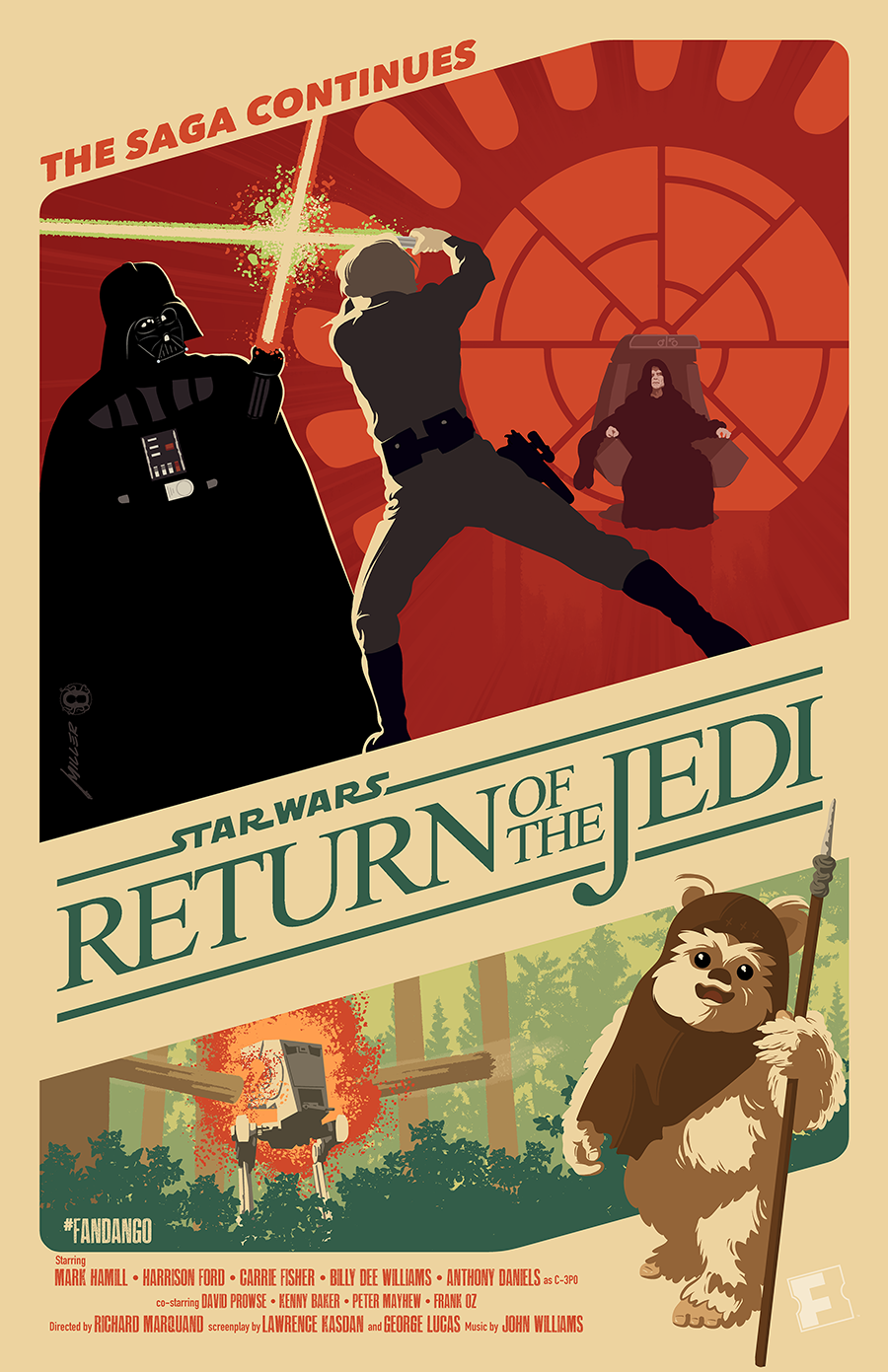 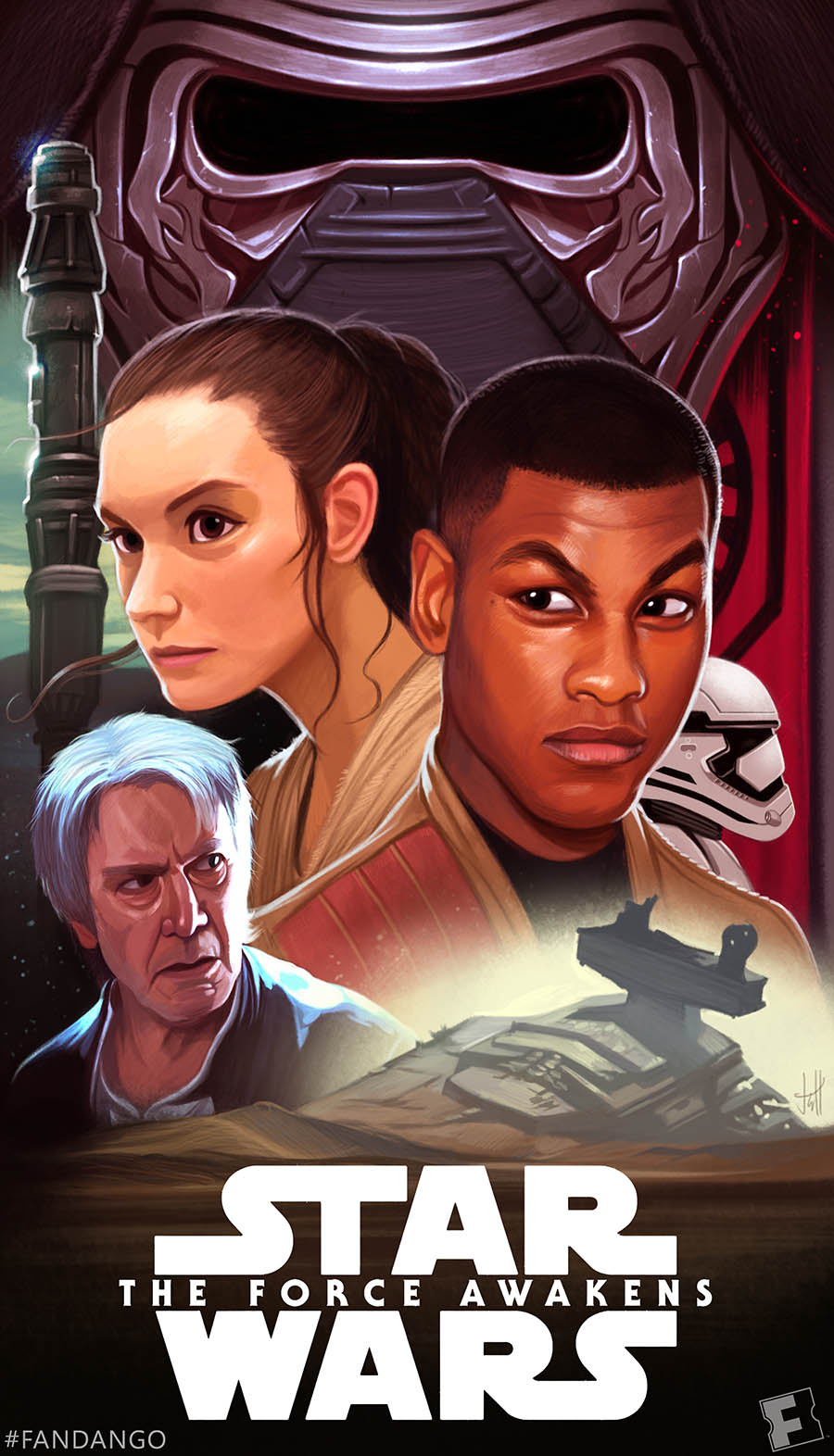