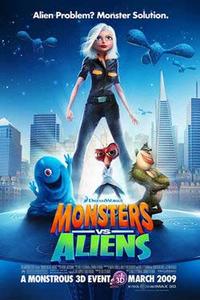 Looking for movie tickets? Enter your location to see which movie theaters are playing Monsters vs. Aliens 3D near you.

When California girl Susan Murphy is unexpectedly clobbered by a meteor full of outer space gunk, she mysteriously grows to 49-feet-11-inches tall and is instantly labeled as a “monster” named Ginormica. The military jumps into action, and she is captured and held in a secret government compound. The world learns that the military has been quietly rounding up other monsters over the years. Their confinement time is cut short, however, when a mysterious alien robot lands on Earth and begins storming the country. As a last resort, under the guidance of General W.R. Monger (on a desperate order from the President), the motley crew of monsters is called into action to combat the aliens and save the world from imminent destruction.