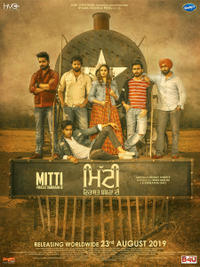 Looking for movie tickets? Enter your location to see which movie theaters are playing Mitti - Virasat Babbaran Di near you.

The film is based on the current situation in Punjab, where drug consumption is growing thus killing Punjab. The film also showcases that how cops and political parties are ignoring this problem for their own benefits and the youth of Punjab is happy in their own deeds until when their inner soul wakes up and completely shakes the system. The film is shot in the past and present situations, among which the past is based on true events in the year 1920 where 5 freedom fighters, who left their happy life in Canada and come back for the nation, fought and died for its betterment. Similarly in the present day in 2019, as we fought with the Britishers pre-independence and today, we have to fight with our own people who are worst than those English rulers.