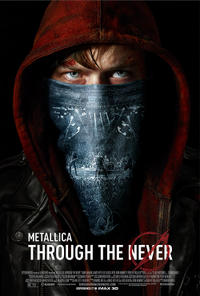 Looking for movie tickets? Enter your location to see which movie theaters are playing Metallica Through the Never near you.

Starring Metallica, a cast of thousands of their fans and breakout star Dane DeHaan (Chronicle, The Amazing Spider-Man 2), Metallica Through the Never is written and directed by award-winning filmmaker Nimród Antal (Predators, Kontroll) and produced by former IMAX film producer Charlotte Huggins (Journey to the Center of the Earth). The film marries groundbreaking footage and editing techniques with a compelling narrative, in which a band crew member (played by DeHaan) is sent out on a mission during Metallica's roaring live set in front of a sold-out arena. While on this mission, he unexpectedly has his life turned completely upside down.