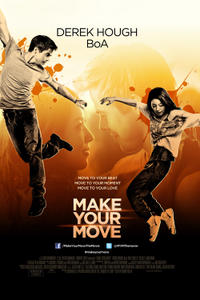 Looking for movie tickets? Enter your location to see which movie theaters are playing Make Your Move near you.

The music is pumping, the dance floor is moving and Donny (DEREK HOUGH) stops when he sees Aya (BoA) performing with her hip-hop Cobu crew on stage at Static, the hottest underground club in New York. They come from two different worlds, but they speak the same language - dance. Against all odds, they come together and show the world what they've got in MAKE YOUR MOVE. MAKE YOUR MOVE stars international dance sensation Derek Hough (DANCING WITH THE STARS) along with Korean pop star BoA, in her first English language feature film leading a cast of talented actors, dancers and artists in this classic dance romance, with a unique twist. Written and directed by Duane Adler (STEP UP and SAVE THE LAST DANCE), the film features choreography by Napoleon Dumo and Tabitha Dumo (SO YOU THINK YOU CAN DANCE and AMERICA'S BEST DANCE CREW).