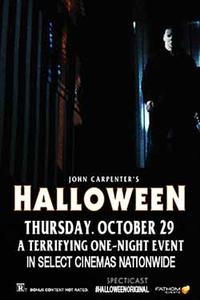 Looking for movie tickets? Enter your location to see which movie theaters are playing John Carpenter's Halloween near you.

Fathom Events and SpectiCast are thrilled to bring John Carpenter's HALLOWEEN back to select cinemas nationwide for a special one-night event on Thursday, October 29 at 7:30 p.m. local time. After John Carpenter’s HALLOWEEN premiered in a theatre in Kansas City, Missouri, on October 25th, 1978, the horror film starring Jamie Lee Curtis took the country by storm. Over 35 years later, it earned the title of one of the most successful independent horror films of all time. This seminal film about serial killer, Michael Myers, launched a huge franchise and has been making audiences scream ever since its debut. Directed by John Carpenter, who also co-wrote the film with Debra Hill, this film received a very rare honor when it was selected by the Library of Congress for preservation. Do not miss your chance to see this classic horror film back and on the big screen this Halloween.