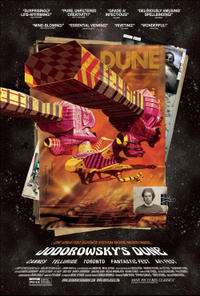 Looking for movie tickets? Enter your location to see which movie theaters are playing Jodorowsky's Dune near you.

He has been called surreal, a visionary, as well as cinema’s shaman of psychedelia. He has also been considered a mad genius and bonkers. But in 1974, Alejandro Jodorwosky, the man behind the hallucinatory El Topo and Holy Mountain, took on what could have been one of the greatest sci-fi cult epics of all time, Frank Herbert’s Dune, with a cast and creative team that blows the mind. Frank Pavich’s mesmeric documentary JODOROWSKY’S DUNE tells one of the legendary “what if” stories of lost Hollywood cinema and gives a pretty far-out peek into what could have been.