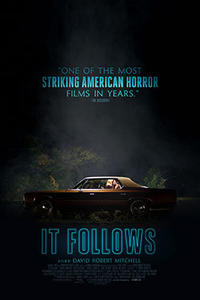 Looking for movie tickets? Enter your location to see which movie theaters are playing It Follows near you.

For 19-year-old Jay (Maika Monroe, THE GUEST), the fall should be about school, boys and weekends at the lake. Yet after a seemingly innocent sexual encounter she suddenly finds herself plagued by nightmarish visions; she can't shake the sensation that someone, or something, is following her. As the threat closes in, Jay and her friends must somehow escape the horrors that are only a few steps behind. With a riveting central performance from Monroe and a strikingly ominous electronic score by Disasterpeace, IT FOLLOWS is an artful psychosexual thriller from David Robert Mitchell (whose THE MYTH OF THE AMERICAN SLEEPOVERS premiered at Critics' Week in 2010). The film also stars Keir Gilchrist ("The United States of Tara"), Daniel Zovatto (LAGGIES), Jake Weary ("Chicago Fire"), Olivia Luccardi ("Orange is the New Black"), and Lili Sepe (SPORK).