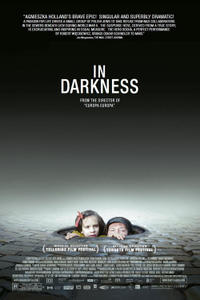 Looking for movie tickets? Enter your location to see which movie theaters are playing In Darkness (2012) near you.

Leopold Socha (Robert Wiêckiewicz,) a sewer worker and petty thief in Lvov, a German-occupied city in Poland, encounters a group of Jews trying to escape the liquidation of the ghetto, and hides them for money in the labyrinth of the town’s sewers beneath the bustling activity of the city above. What starts out as a straightforward and cynical business arrangement turns into something very unexpected, the unlikely alliance between Socha and the Jews, as the enterprise seeps deeper into Socha’s conscience. The film is also an extraordinary story of survival as the men, women and children in hiding all try to outwit certain death during 14 months of ever increasing and intense danger. IN DARKNESS was filmed on location in Poland and Germany as well as Berlin’s Studio Babelsberg where the crew and cast worked in recreated water-filled sewers.<br /> <b>*Note:</b> Film is presented in Polish/German/Yiddish/Ukrainian with English subtitles.