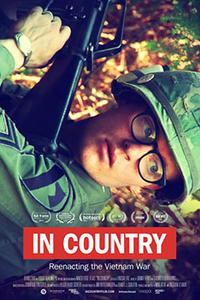 Looking for movie tickets? Enter your location to see which movie theaters are playing In Country (2015) near you.

The idea of Civil War re-enactment is a familiar, even comical concept. But the men of Delta 2/5(R) recreate the battles of a far more charged conflict: The Vietnam War. For one weekend a year, the woods of Oregon transform as a mix of combat enthusiasts, Iraq veterans, and even a former South Vietnamese Army officer, revive — by choice — a war that a whole generation would much rather forget. Disquieting and provocative, In Country blurs fantasy with trauma, deftly tugging at the imposing question: what compels these men to don vintage uniforms and meticulously bring this controversial war back to life?