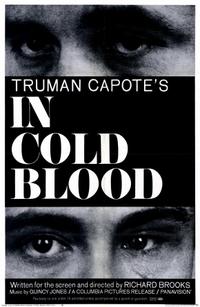 Looking for movie tickets? Enter your location to see which movie theaters are playing IN COLD BLOOD / THE NINTH CONFIGURATION near you.

IN COLD BLOOD. This starkly masterful adaptation of Truman Capote’s true-crime classic emerges as one of the finest films by director Richard Brooks. Robert Blake and Scott Wilson etch startlingly vivid portrayals of killers Perry Smith and Dick Hickock, two small-time thieves whose bungled home-invasion robbery evolved into a slaughter of the helpless Clutter family. THE NINTH CONFIGURATION. This hilarious, thrilling and altogether amazing fusion of horror film, ultra-black comedy and religious allegory was directed and written by THE EXORCIST author William Peter Blatty. Stacy Keach stars as the psychiatrist assigned to straighten out the inmates in a decaying castle taken over by the U.S. military. Scott Wilson earned a Golden Globe nomination for his performance as Captain Billy Cutshaw.