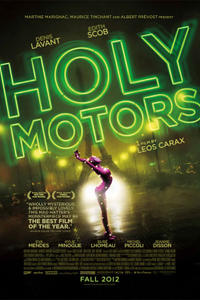 Looking for movie tickets? Enter your location to see which movie theaters are playing Holy Motors near you.

Carax re-imagines the City of Light as the backdrop for nearly a dozen surreal adventures starring the filmmaker's longtime collaborator Denis Lavant as a 21st century man of a thousand faces. Travelling through Paris in a white stretch limo, with his elegant, imperturbable female chauffeur (Edith Scob), he effortlessly transforms from Monsieur Oscar, a conventional businessman, to a motion-capture acrobat, a sewer-dwelling leprechaun (who kidnaps a supermodel, played by Eva Mendes), the boisterous leader of an accordion marching band, an assassin, a bag lady, a forlorn lover (Kylie Minogue) and... Michel Piccoli has a cameo as Oscar's mysterious boss. <br /> <strong>Note:</strong> In English and French with English subtitles.