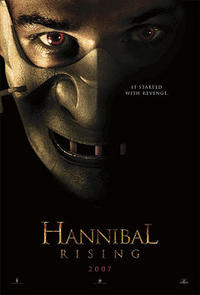 Looking for movie tickets? Enter your location to see which movie theaters are playing Hannibal Rising near you.

In Eastern Europe at the end of World War II, a young Hannibal watches as his parents violently die, leaving his cherished young sister in his care. This horrific moment will soon pale in comparison to the atrocities he is forced to witness and perhaps survive as a result of. Alone and without any means of support, he is forced to live in a Soviet orphanage that once served as his family’s beloved home. He flees to Paris to find his uncle has died but his beautiful and mysterious Japanese widow, Lady Murasaki (Gong Li) welcomes him. Showing a cunning aptitude for science, he is accepted into medical school, which serves to hone his skills and provide the tools to exact justice on the war criminals that haunt him day and night. This quest will ignite an insatiable lust within a serial killer who was not born, but made.