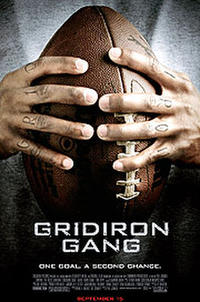 Looking for movie tickets? Enter your location to see which movie theaters are playing Gridiron Gang near you.

Columbia Pictures' <i>Gridiron Gang</i> tells the gritty and powerfully emotional story of juvenile detention camp probation officer Sean Porter (Dwayne "The Rock" Johnson), who, along with another officer, Malcolm Moore (Xzibit), turns a group of hard core teenage felons into a high school football team in four weeks. Confronted with gang rivalries and bitter hatred between his teammates, Porter teaches some hard lessons (and learns a few himself) as the kids gain a sense of self-respect and responsibility. In a world where 75% of these juvenile inmates return to prison or meet with violent ends on the streets, Porter and Moore face seemingly insurmountable barriers. No one wants to compete against convicted criminals, but through relentless pursuit and a jolt of inspiration, Porter and his team fight their way to redemption and a second chance.