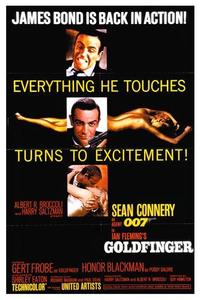 Looking for movie tickets? Enter your location to see which movie theaters are playing Goldfinger / Thunderball near you.

GOLDFINGER, 1964, Park Circus/MGM, 111 min. Dir. Guy Hamilton. "Do you expect me to talk, Goldfinger?" "No, Mr. Bond, I expect you to die," cackles villain Auric Goldfinger (Gert Frobe) as he prepares to rearrange 007’s secret equipment with a laser beam, in what is widely considered to be the best of the classic Sean Connery Bond pictures and a high point in 1960s pop culture. With Honor Blackman as Pussy Galore. THUNDERBALL, 1965, Park Circus/MGM, 130 min. Dir. Terence Young. Bond’s therapeutic rest cure is cut short when a British plane with two A-bombs aboard is hijacked by SPECTRE and secreted below the waters of the Caribbean. Featuring three of the most dynamic Bond women ever: Claudine Auger, Luciana Paluzzi and Martine Beswick.