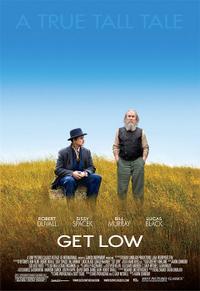 Looking for movie tickets? Enter your location to see which movie theaters are playing Get Low / Tomorrow near you.

GET LOW, 2010, Sony Pictures Classics, 103 min. Dir. Aaron Schneider. Screen great Robert Duvall is Felix Bush, an eccentric Southern hermit who, in 1930s Tennessee, throws himself his own riotous, down-home funeral party - which he attends while still alive! Based on the wacky real-life figure who is delightfully shrouded in rollicking myth, folklore and legend, GET LOW also stars the immensely talented Sissy Spacek and Bill Murray. <br /> TOMORROW, 1972, Castle Hill Productions, 103 min. Dir. Joseph Anthony. Robert Duvall stars as a Mississippi farmer who, despite his own independent predisposition, falls in love with a pregnant woman who has been abandoned by her husband. Based on a story by William Faulkner, this drama was adapted by Horton Foote (TO KILL A MOCKINGBIRD) from his play and is understated, touching and romantic.