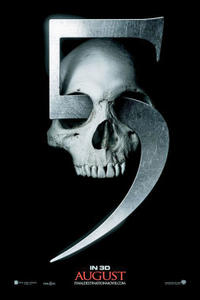 Looking for movie tickets? Enter your location to see which movie theaters are playing Final Destination 5 near you.

In "Final Destination 5," Death is just as omnipresent as ever, first revealing its menacing reality to a group of coworkers headed for a corporate retreat. During the bus ride, Sam (Nicholas D'Agosto) has a premonition in which he and most of his friends, as well as numerous others, die in a horrific bridge collapse. When his vision ends, events begin to mirror what he had seen, and he frantically ushers as many of his colleagues—including his friend, Peter (Miles Fisher), and girlfriend, Molly (Emma Bell)—away from the disaster before Death can claim them. But these unsuspecting souls were never supposed to survive and, in a terrifying race against time, the ill-fated group tries to discover a way to escape Death's sinister agenda.