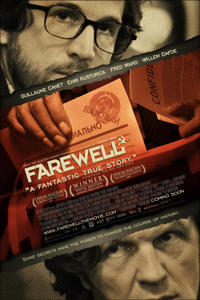 Looking for movie tickets? Enter your location to see which movie theaters are playing Farewell (2010) near you.

Directed by Christian Carion, the Academy Award® nominated filmmaker of JOYEUX NÖEL (Merry Christmas), FAREWELL begins in 1981, after the Soviet invasion of Afghanistan. US/Soviet relations are at their lowest point in more than a decade. A French businessman based in Moscow, Pierre Froment, makes an unlikely connection with Grigoriev, a senior KGB officer disenchanted with what the Communist ideal has become under Brezhnev. Grigoriev begins passing him highly sensitive information about the Soviet spy network in the US. Torn between the fear of putting his wife and children in danger and the desire to know more, Froment brings the documents to the French government. Soon, the flow of information reaches the White House and brings the Soviet regime to the tipping point of collapse, forcing the KGB to escalate its search for the leak, and placing the two men and their families in extreme peril.