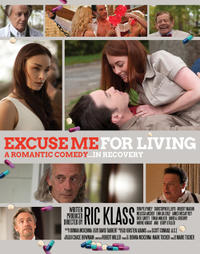 Looking for movie tickets? Enter your location to see which movie theaters are playing Excuse Me For Living near you.

The story of Dan Topler, a rich, smart, suicidal 20-something who dropped out of medical school to pursue his own drug habit. Well provided for and a bit coddled, he refuses to grow up or get happy. After a suicide attempt on the George Washington Bridge lands him in an upscale rehabilitation clinic, Dr. Jacob Bernstein takes him under his wing. The doctor issues these commands: obey the no- drugs rules, and join the geriatric temple men’s group he leads - or face incarceration. Despite Dan’s negative attitude attending the seniors' club, he finds he’s among accomplished men and becomes engrossed with their lives.