Everybody Has a Plan Synopsis Favorite Movie Button 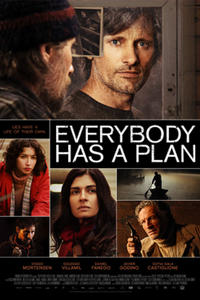 Looking for movie tickets? Enter your location to see which movie theaters are playing Everybody Has a Plan near you.

EVERYBODY HAS A PLAN tells the story of Agustín (Mortensen), a man desperate to abandon what for him has become, after years of living in Buenos Aires, a very frustrating existence. After the death of his twin brother, Pedro, Agustín decides to start a new life, adopting the identity of his brother and returning to the mysterious region of the Delta, in theTigre, where they lived when they were boys. However, shortly after his return, Agustín will find himself unwillingly involved in the dangerous criminal world that was a part of his brother’s life.<br /> <strong>*Note:</strong> In Spanish with English subtitles.