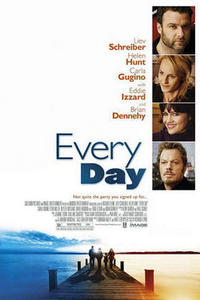 Looking for movie tickets? Enter your location to see which movie theaters are playing Every Day (2011) near you.

Ned (Liev Schreiber), a Brooklyn-based television writer whose life as loving husband and father is turned upside down, not by any single crisis, but by a number of little curveballs thrown at him all at once. First, his marriage to Jeannie (Helen Hunt) is subjected to strain when her sick father (Brian Dennehy) moves in with them, turning Ned’s normally attractive, intelligent wife into a bundle of raw nerves. Then, their teenage son, Jonah (Ezra Miller) announces he is gay, but refuses to discuss it with his somewhat surprised and stymied father. Further complications arise at work, where the hilariously vulgar producer (Eddie Izzard) of the series Ned writes insists on ramping up the show’s shock quotient. Late night rewrite sessions with his cynical, sexy co-worker, Robin, nearly push Ned over the edge, and threaten to unravel his already frayed marriage.