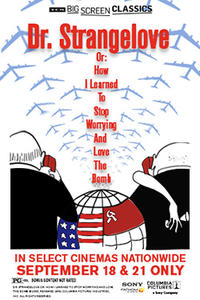 Looking for movie tickets? Enter your location to see which movie theaters are playing Dr. Strangelove presented by TCM near you.

Fathom Events, Turner Classic Movies and Sony Pictures Entertainment invite you to scheme on the big screen when the Stanley Kubrick classic Dr. Strangelove or: How I Learned to Stop Worrying and Love the Bomb (1964) bursts into cinemas nationwide for a special two-day event on Sunday, September 18 and Wednesday, September 21. This beloved classic will be accompanied by special commentary from TCM hosts Robert Osborne or Ben Mankiewicz, who will provide insight, background and more, making this film come alive. This brilliant satire on politics, nuclear Armageddon and the military industrial complex, is also a cornucopia of outrageous comic performances, not the least of which were the three roles portrayed by Peter Sellers. Screenplay by Stanley Kubrick, Peter George & Terry Southern and directed by Stanley Kubrick.