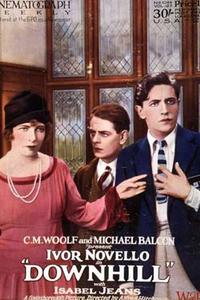 Looking for movie tickets? Enter your location to see which movie theaters are playing Downhill / Rebecca near you.

Double Feature: DOWNHILL (WHEN BOYS LEAVE HOME), 1927, British Film Institute, 105 min. Dir. Alfred Hitchcock. Ivor Novello cowrote the play upon which this drama was based, and he stars as Roddy Berwick, a top rugby player at a tony English boarding school. Roddy takes the blame for his best friend when a local girl both had dated gets pregnant, and his life goes downhill from there. A restoration by the BFI National Archive in association with ITV Studios Global Entertainment and Park Circus Films. REBECCA, 1940, Walt Disney Pictures, 130 min. Director Alfred Hitchcock’s Gothic romance asks the question: Did guilt-ridden, rich widower Laurence Olivier do away with his notorious wife Rebecca or not? And what secret does sinister, manipulating housekeeper Mrs. Danvers (Judith Anderson) hold? As the widower’s second wife, a young Joan Fontaine attempts to unravel the mystery.