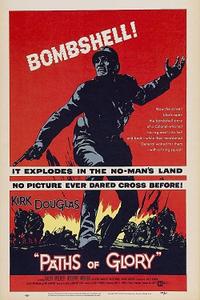 Looking for movie tickets? Enter your location to see which movie theaters are playing Double Feature: PATHS OF GLORY / THE ASCENT near you.

Antiwar Double Feature! In Stanley Kubrick’s PATHS OF GLORY, WWI officer Kirk Douglas finds himself in a maze of Catch-22 contradictions when he decides to defend three of his men against charges of cowardice. THE ASCENT follows the path of two peasant soldiers, whose harrowing trek through the snowy backwoods of Belarus leads them on a journey of betrayal, heroism and ultimate transcendence.