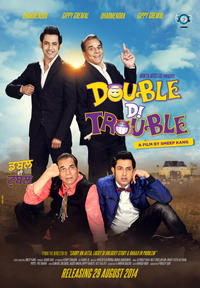 Looking for movie tickets? Enter your location to see which movie theaters are playing Double Di Trouble near you.

Double di Trouble, based on Comedy of Errors, Shakespeare's well-known play, takes a desi avatar when father-son pair discovers their mirror images in a different city. The riot of laughter begins when the people around this duplicate duo keep confusing between the two! The situation gets further confounded when the duo tries to put their own logic behind the new faces behaving like old pals. Hold your horses before you jump to conclusions. This is one of the morals of the film. For the rest, come and die with laughter and witness the legendary Dharmendra's first full-fledged foray in a Punjabi film alongside the reigning superstar, Gippy Grewal.