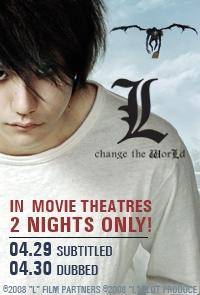 Looking for movie tickets? Enter your location to see which movie theaters are playing Death Note: L, Change the WorLd (subtitled) near you.

<p>By popular demand ... Viz Pictures and NCM Fathom partner again to present <em>Death Note: L, change the WorLd</em> two days only - Wednesday, April 29 and Thursday, April 30 at 7:30PM local time in a movie theatre near you. <em>Death Note: L, change the WorLd</em> is the third live action event based on the Death Note Manga franchise. The follow up to <em>Death Note</em> and <em>Death Note II, Death Note: L,</em> change the WorLd will feature Fathom’s first ever subtitled event. The first night will be subtitled (Japanese with English subtitles); the second night will be overdubbed in English. Both nights will feature exclusive behind-the-scenes footage and interviews of Kenichi Matsuyama (L), Alessandro Juliani (L's English voice actor), and Hideo Nakata (the director).</p>