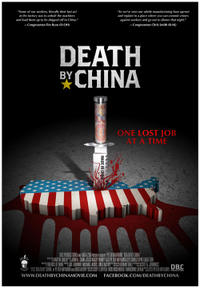 Looking for movie tickets? Enter your location to see which movie theaters are playing Death By China near you.

DEATH BY CHINA, a documentary feature which pointedly confronts the most urgent problem facing America today - its increasingly destructive economic trade relationship with a rapidly rising China. Since China began flooding U.S. markets with illegally subsidized products in 2001, over 50,000 American factories have disappeared, more than 25 million Americans can't find a decent job, and America now owes more than 3 trillion dollars to the world's largest totalitarian nation. Through compelling interviews with voices across the political spectrum, DEATH BY CHINA exposes that the U.S.-China relationship is broken and must be fixed if the world is going to be a place of peace and prosperity.