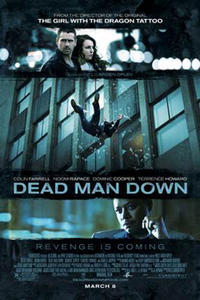 Looking for movie tickets? Enter your location to see which movie theaters are playing Dead Man Down near you.

Niels Arden Oplev, the acclaimed director of the original The Girl with the Dragon Tattoo, makes his American theatrical debut with a provocative new thriller, DEAD MAN DOWN. Colin Farrell and Noomi Rapace star as two strangers, irresistibly drawn to each other, whose mutual desire for revenge unravels in an escalating trail of violence. The film co-stars Academy Award® nominee Terrence Howard and Dominic Cooper, from a screenplay by J.H.Wyman (Fringe).