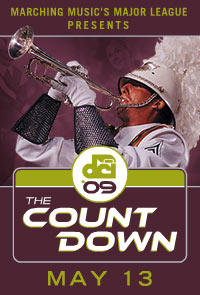 Looking for movie tickets? Enter your location to see which movie theaters are playing DCI 2009: The Countdown near you.

NCM Fathom and Drum Corps International are proud to present “DCI 2009: The Countdown” in select theatres nationwide on Wednesday, May 13th only. Drum corps fans will again get their chance to "make the call" as they select – and then judge – their favorite performances of the world's most elite marching music ensembles as part of Drum Corps International’s 2009 spring cinema event, “The Countdown.” The program will feature six full-length corps performances from among the 72 World Championship Finalists of the past six seasons (2003-2008).