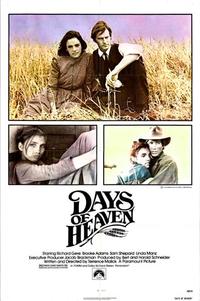 Looking for movie tickets? Enter your location to see which movie theaters are playing Days of Heaven/McCabe and Mrs. Miller near you.

DAYS OF HEAVEN, 1978, Paramount, 95 min. Director Terrence Malick’s lyrical tone poem set at the turn of the 20th century tracks impoverished Chicago couple Richard Gere and Brooke Adams as they migrate to the Texas Panhandle and masquerade as brother and sister to find farm work. When their smitten, terminally ill boss (Sam Shepard) proposes to Adams, the couple see a way out of their poverty.<br><br> MCCABE & MRS. MILLER, 1971, Warner Bros., 120 min. Director Robert Altman spins fresh variations on archetypal themes and characters in a film that set the mood for 1970s revisionist Westerns. Memorable opening images of an unlikely hero riding toward town, accompanied by the music of Leonard Cohen, introduce this opium dream of a Western, starring Warren Beatty and Julie Christie, with superb cinematography by Vilmos Zsigmond.