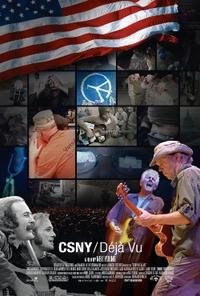 Looking for movie tickets? Enter your location to see which movie theaters are playing CSNY Deja Vu near you.

Since their debut in the late 'sixties, Crosby, Stills, Nash and Young have functioned as the "town criers" of their generation. With songs like "Ohio" and "Find the Cost of Freedom", CSNY were in the forefront of Vietnam-era protest and anti-war sentiment. Though fondly remembered for their harmonies and love songs, the band has never lost their political edge. "CSNY: Deja Vu" finds the band heading out on their "Freedom of Speech 2006" of North America, featuring music from Neil Young's controversial "Living With War" CD. With "Embedded" reporter Mike Cerre aboard, the film documents audience reactions to the music and the band's ongoing connection with its fans, all against the backdrop of the Iraq/Afghanistan War.