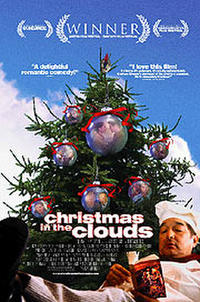 Looking for movie tickets? Enter your location to see which movie theaters are playing Christmas in the Clouds near you.

Ray, General Manager of a Native American ski resort is preparing for the arrival of an anonymous critic working for a travel guide. In addition, Tina, a young woman is staying at the resort hoping to meet her pen pal of many years, a retired chief who happens to be Ray's father. Ray however believes Tina is the critic, and Tina believes Ray is her pen pal. While the two fall in love, the real critic is victim to a series of follies at the resort.