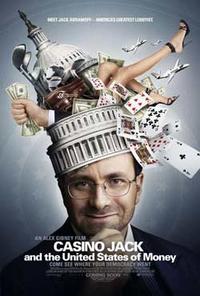 Looking for movie tickets? Enter your location to see which movie theaters are playing Casino Jack and the United States of Money near you.

High rollers in Indian casinos, hookers in Saipan, a murdered Greek tycoon, Cold War spy novels, plush trips to paradise... and the United States Congress. These are among the intriguing clues that add up to the epic mystery behind one of the greatest attempted heists in American history. It’s a twisting tale in which a small group of charming con men use the power of the purse, the zealotry of religion and bare-knuckled political brawling to loot the American government for fun, ideals and profit. It’s about ambitious young men who wanted to change the world, the politicians who needed their money, the corporations and gambling-rich tribes who desired their influence -- and how millions were extorted and the foundations of our democracy imperiled in the toxic mix of power and cash.