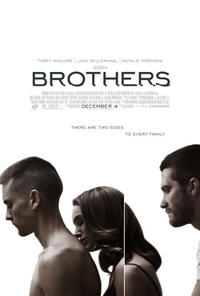 Looking for movie tickets? Enter your location to see which movie theaters are playing Brothers near you.

"Brothers" tells the powerful story of two siblings, thirty-something Captain Sam Cahill (Tobey Maguire) and younger brother Tommy Cahill (Jake Gyllenhaal), who are polar opposites. A Marine about to embark on his fourth tour of duty, Sam is a steadfast family man married to his high school sweetheart, the aptly named Grace (Natalie Portman), with whom he has two young daughters. Tommy, his charismatic younger brother, is a drifter just out of jail who’s always gotten by on wit and charm. When his Black Hawk helicopter is shot down in the mountains Sam is presumed dead and the Cahill family suddenly faces a shocking void. Tommy tries to fill in for his brother by assuming newfound responsibility for himself, Grace, and the children. In the grief and strangeness of their new lives, Grace and Tommy are naturally drawn together. Their longstanding frostiness dissolves, but both are frightened and ashamed of the mutual attraction that has replaced it.