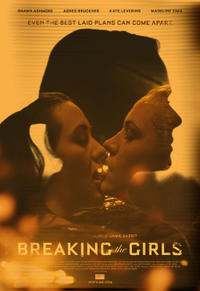 Looking for movie tickets? Enter your location to see which movie theaters are playing Breaking the Girls near you.

Directed by beloved cult filmmaker Jamie Babbit ("But I'm a Cheerleader") and written by Guinevere Turner ("American Psycho") and Mark Distefano, "Breaking the Girls" is a delicious Hitchcockian thriller revolving around a dangerous pact between sexy twenty­somethings Sara (Agnes Bruckner of “Private Practice” and "Murder by Numbers") and Alex (Madeline Zima, “Heroes,” “Californication”). When Sara meets Alex at a bar one night, an intense relationship immediately forms between them­­ and quickly goes to a dark place. Each of the girls discovers an urge to rid themselves of a special enemy­­ and their furtive plotting and sexual relationship quickly escalates to a tangled web of violence and lies.