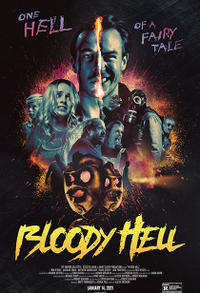 Looking for movie tickets? Enter your location to see which movie theaters are playing Bloody Hell (2021) near you.

When a bank heist goes awry, Rex Coen spends eight years in prison. Upon release, he's now infamous in his hometown of Boise, Idaho. The unwanted attention forces Rex to flee the country, in search of a better life. But he lands in a new hell. Waking up drugged, beaten, and tied up... Rex turns to his personified Conscience, which he conjured up to help him cope with his horrific past. Together, they must race against time to free themselves from a twisted family hiding a dark secret.