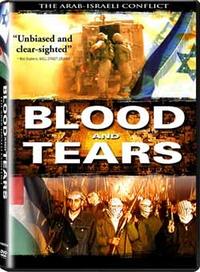 Looking for movie tickets? Enter your location to see which movie theaters are playing Blood and Tears: The Arab-Israeli Conflict near you.

Like an open wound that will not heal the Arab-Israeli conflict refuses to be resolved. Producer and director Isidore Rosmarin uncovers the truth beneath the hype and the headlines. Rosmarin and his team of Middle East experts have gone right to the source: the ministers and mullahs, the fanatics and peaceniks, the soldiers and terrorists, and the ordinary families battling extraordinary forces as they try to live a normal life. They have interviewed top officials from both sides, from former Israeli Prime Ministers to senior Palestinian officials to the leaders of the militant extremist group Hamas, Sheikh Bitawi and the late Dr. Abdel aziz Rantisi. They have also interviewed renowned Mideast scholars Bernard Lewis & Fouad Ajami and the foremost Palestinian scholar, Rashid Khalidi. BLOOD AND TEARS explores the origin of the confrontation itself, and challenges many of the deep-rooted myths we all hold about this epicenter of human conflict.