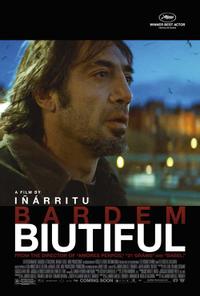 Looking for movie tickets? Enter your location to see which movie theaters are playing Biutiful near you.

A man tries to reconcile his desire to be good with his lawless ways in this dark drama from Mexican auteur Alejandro González Iñárritu. Uxbal (Javier Bardem) is a man with a bright side and a dark side. Uxbal is a caring father but Uxbal is also a criminal who oversees a small underground empire alongside fellow crime boss Hai (Taisheng Cheng) and Uxbal's impulsive brother, Tito (Eduard Fernández). Uxbal's dealings range from drugs to construction, but unlike his partners in crime, he tries to treat those around him with dignity even as he trades in human misery. Uxbal's precarious world begins to collapse when he's diagnosed with a serious illness and told he has only a few weeks left to live; he tries to put his affairs in order in the time he has left, but realizes that few around him have any sense of responsibility.