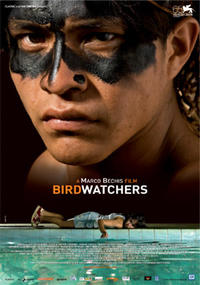 Looking for movie tickets? Enter your location to see which movie theaters are playing Birdwatchers near you.

In Mato Grosso do Sul, Brazil, the farmers lead a wealthy and leisurely existence. They own huge fields with transgenic plantations and they spend their nights with tourists who come bird watching. Meanwhile, at the borders of their lands, the uneasiness of the natives, who were the legitimate inhabitants of those lands, is rapidly growing. Enclosed in reserves, with no other perspective except that of working as semi-slaves in sugar beet plantations, many young people commit suicide. It is such a suicide that stirs up a rebellion. Led by Nadio, and by a shaman, a group of native Guarani-Kaiowà starts camping outside one of the properties to claim their land back. The two opposing worlds face each other, engaging in a metaphorical as well as a real war. But as well as anger, both sides are also fascinated and curious about "the other." A curiosity that will create a deep bond between the young shaman apprentice Osvaldo, and a farmer’s daughter.