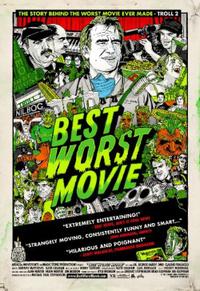 Looking for movie tickets? Enter your location to see which movie theaters are playing Best Worst Movie near you.

In 1989, unwitting Utah actors starred in the undisputed worst movie in history: TROLL 2. Two decades later, the legendarily inept film's child star unravels the improbable, heartfelt story of an Alabama dentist-turned-cult movie icon and an Italian filmmaker who come to terms - or not - with this genuine, internationally revered cinematic failure.