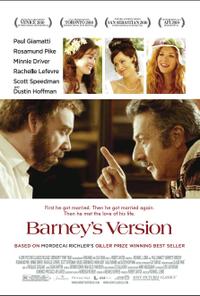 Looking for movie tickets? Enter your location to see which movie theaters are playing Barney's Version near you.

Based on Mordecai Richler's award winning novel -- his last and, arguably, best -- "Barney's Version" is the warm, wise and witty story of the politically incorrect life of Barney Panofsky. The film spans three decades and two continents. There is his first wife, Clara, a flame-haired, flagrantly unfaithful free sprit. The "Second Mrs. P." is a wealthy Jewish Princess who shops and talks incessantly. It is at their lavish wedding that Barney meets, and starts pursuing, Miriam, his third wife, the mother of his two children, and his true love. Not only does Barney turn out to be a true romantic, he is also capable of all kinds of sneaky acts of gallantry, generosity, and goodness. His is a gloriously full life, played out on a grand scale.